My new year started with a volley of gunshots, a night sky ablaze with fireworks, a cacophony of honking geese, and a memory of a forgotten time.

The last in the string of those events is the most important to me. How often does it happen when an incident of the present ignites a time of the past? Often, of course. But when the memory is a gem, it’s worth recounting as the opportunity arises. 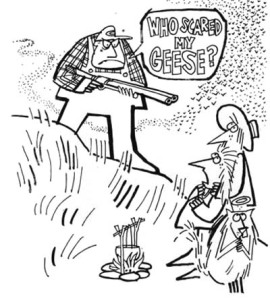 I was fortunate in 1973 to spend a half-year with four other guys retracing the trail of Lewis and Clark by canoe and foot. One member of our journey, Mike Cochran, drew cartoons to record our journey. These scared geese? Read this blog to find out the story. Time to read: less than 3 minutes.

My bride of two months, Patty, and I are spending the winter at her home in Independence, Mo. Her home is in a nice neighborhood interspersed with lakes. The lakes are homes to geese that were too lazy to have flown farther south for the winter.

A couple of minutes after midnight I stepped outside. Firecrackers and gunshots could be heard everywhere as revelers brought in the 2017 New Year. Explosions of fireworks burst here and there over the neighborhood, lighting the sky with sparkling blues, reds and whites.

The geese wanted none of this. They took to the air, honking hard and loud, and flew by overhead. They blocked out the stars.

It was then, thanks to their loud protests, that I remembered the time so long ago when geese and Lewis and Clark about got me done in.

Five of us, all young guys, spent a half-year retracing the 1804-06 journey of Meriwether Lewis, William Clark and their companions, including a dog, into the unexplored lands of the Louisiana Purchase and Pacific Northwest. Our quest was to follow their return route from the mouth of the Columbia River in Oregon to St. Louis, which was the farthest western outpost of civilization in the early 1800s. We did this by using two canoes and a kayak to paddle the Columbia, Snake and Missouri rivers. We hiked across the Rockies in Idaho and Montana.

All in all, 4,200 miles of sweat, weary bodies, blistered feet, meals over campfires, cold rain, big winds and, best of all, adventure. We experienced America like few others have in modern times, paddle stroke by paddle stroke, stride by stride. This was in 1973 and I was 43 years younger than I am now.

In the Dakotas, we journeyed down the Missouri River as a million geese made their fall migration south along the river. One day our immediate destination was Pierre, South Dakota’s state capital. We were scheduled the next day to meet the governor to conduct a ceremony about Lewis and Clark. This we had done with governors of other states along the trail. 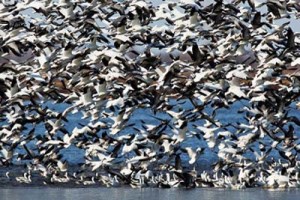 A million geese and ducks migrate south along the Missouri River in the fall. We journeyed down the river at the same time, often seeing huge flocks like this one. Photo by the Omaha World Herald.

Smelled of soured sweat: The afternoon became late, and we knew we couldn’t reach Pierre by nightfall. We secured our boats and equipment on shore and headed for a road that our map showed was nearby. We intended to hitchhike into Pierre and camp the night there.

With sleeping bags in hand, we climbed up a steep river bank. Our sun-faded clothes were ragged from five months on the trail; our long beards, scraggly. We smelled of soured sweat and smoky campfires.

On top of the bank, we stepped into a huge field covered with dried stalks of corn. Suddenly, thousands of geese sprang skyward from feasting on the corn, their honking deafening, wings swirling the air around us.

Clay and the two Mikes scurried off in a failed attempt to catch stragglers waddling through the corn. Their intention was dinner, much as we had eaten rattlesnake back on the Columbia. Fresh meat would be a good change to change our steady diet of freeze-dried and dehydrated food.

Bob, eyes studying the miracle of the geese flying above, wandered farther into the field. I remained behind, still, awed. I’d never seen anything like this mass of geese and likely never would again. Most geese merged into V formations and flew away. Hundreds, though, re-landed on the field.

A pickup sped away from a nearby farm house and came barreling straight at me. It fishtailed through the corn. Geese took flight again. The truck almost hit me before skidding to a stop. The driver, burly, red-faced, flew out. He bulled his way right up to my face. His neck veins bulged with rage.

“Just what the hell of damnation are you doing here, you lop-eared sumabitch?” Bulging Veins screamed. He was an old guy. His breath smelled like the inside of a cow barn.

He turned to reach for a shotgun hanging on a rack across the back window.

Murder was on his mind. Of that, I was sure. Suddenly I realized our Lewis and Clark excursion might be my fatal Waterloo. Just my luck, done in by trying to reach across the past to guys 200 years ago. Who would’ve guessed?

The passenger, a younger man, stopped him by reaching up and firmly holding down the weapon in its place on the rack, thankfully.

He rounded us up, yelling in rage as we tried to explain to our sudden appearance in the cornfield. No go. At least, we offered, let us get our boats and paddle away…

He aimed a dirty forefinger toward the road. “If you ain’t off my land in five minutes, I’m gonna blow your heads off,” he swore harshly. “You got my word on that.”

He added with spittle blowing out of his mouth, “Don’t never come back here again, not even for your gawdamned boats. You got three minutes.”

Two minutes later, we were on the road, thumbs out. In Pierre, we found a public park to lay out our sleeping bags. We also sought out a conversation with the law. The state patrol entered into a pithy phone negotiation with Bulging Veins.

Lewis & Clark’s confrontations: Later, as the darkness of night spread over us, I recalled entries in Lewis and Clark’s journals where they faced off against local natives. A reluctant gift of tobacco to the Sioux ended one Missouri River standoff. A Montana brawl left one member (possibly two) of the Blackfoot nation dead when they attempted to steal guns and horses—a tragedy that would mar U.S. relationships with the Blackfoot nation for decades.

The day after our encounter with Bulging Veins we strolled into the capitol building. To our surprise, the hallways were empty and we couldn’t find a sign directing us to the governor’s officer. Finally, a stoop-shouldered gentleman came along. We gathered around him and asked if he knew where we could find the governor.

Were we there to assassinate the governor?

He took in the sight of our mangy beards and mud-splattered clothes. His nose wrinkled from the onslaught of our odor. His eyes tightened. I could read his concern: Were these bums here to assassinate the governor?

Blinking, he stuttered, “Why, uh, why, I am the governor.”

It was then that Richard Kneip remembered our appointment. We followed him to his office. A stuffed goose hung on the wall. He was a hunter.

The Lewis and Clark ceremony proceeded as expected. His aide informed him about our previous day’s encounter. The governor knew the quick-tempered farmer. He said the farmer purposely left corn in his field to attract migrating geese. He charged hunters $15 a day to shoot the birds.

I made a quick calculation. Bulging Veins claimed we cost him $10,000. That amount divided by 15: more than 600 hunters. No wonder he wanted to keep the geese on his land. It was a small fortune back in those days.

“Every goose hunters in our state wants to stomp through his fields and chase those geese away, but everybody’s afraid to, including me,” Gov. Kneip admitted. With a laugh, he added, “And you fellows did it without knowing any better.”

By the end of the afternoon, the state patrol had delivered us back to our boats and equipment. We were on our way again, following Lewis & Clark. And, unbeknownst to me back then, I had a memory to help bring in the New Year of 2017.

Find out more about our journey and what happened to the five of us in the ensuing decades And see more Mike Cochran cartoons.

Read some of my previous articles